Average cost of a data breach for a company? 4 million dollars according to a study conducted by IBM in 2016. Enough to give corporate executives a cold sweat, especially as cyber-attacks keep growing, particularly in France… 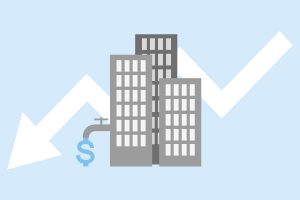 PricewaterhouseCoopers estimates that the number of cyber-attacks increased by 38% worldwide in 2015… and 51% in France! 2016 promises to be a record year in data leaks. The current trend shows millions of password hacks per week. At a time when personal and professional uses and devices tend to blend, your company may be open to more security breaches.

The extent of shadow IT

Beyond “traditional” attacks lies the hold of shadow IT. Behind this term that seems to come straight out of a comic book lies the commonplace practice of installing programs on one’s computer or smartphone without the approval of IT. Some will see this as an innovative contribution to productivity, as these programs usually provide an instant solution to real needs or support new initiatives. But in fact, they weaken the shield that protects the company from data loss or theft. Downloaded software very rarely comply with the safety requirements of professional exchanges.

According to a study published by Wellcom/Opinion Way in March 2016, the number of companies exposed to the loss of sensitive data has doubled in 7 years. A report published in 2015 by Capgemini indicates that 90% of companies have had their computers hacked. Not all have suffered the costs announced by IBM, but that leads to some reservation. Data protection laws in Europe are becoming more stringent and individual responsibility can now be engaged. The question that we are entitled to ask is this: Have companies today truly integrated data loss in their risk management initiatives? According to Wellcom/OpinionWay, among 44% of responding companies, individuals who access sensitive information have not received training or special authority to handle this type of event. Alarmingly, more than 50% of responding leaders ignore the legal aspects of data security. It is difficult to inform employees of the risks incurred when managers themselves ignore or underestimate threats.

Toward a new awareness

Modern executives are not mistaken: Data is at the heart of all challenges. According to the Wellcom/Opinion Way survey, 88% claim to have initiated security measures for their information systems. This shows they will be able to support change by empowering everyone to manage data securely. Software vendors are also following the trend. Ercom, specialized in communications security, recently announced the launch of Cryptobox, a secure data sharing professional solution to rival the controversial use of the much less secure Dropbox. https://www.ercom.fr/cryptobox/