In previous posts were covered the questions operators are wondering about: to address some issues related to capacity and quality in the context of the Internet of Things, connected cars or merely image and video transmission over mobile networks.

During the Mobile World Congress, which took place in February in Barcelona, the expected 5G stall had the lion’s share in terms of focus and commotion and major operators declared a Press Releases war awaiting for 2020, the probable year of this new standard’s deployment for the general public : AT&T announced its collaboration with Ericsson and Intel*  for the future 5G; Verizon** unveiled the foundation of a technology collaboration forum with Alcatel-Lucent, Cisco, Ericsson, Nokia, Qualcomm and Samsung ;  the Korean KT and the Japanese NTT DoCoMo confirmed their intention to market 5G during 2018 and 2020 Olympic Games; etc.

Meanwhile, and almost unseen, the Chinese Huawei*** announced the deployment of an actual 4.5G for 2016, while holding its long term announcements regarding 5G! With this announcement of a mid-5G technology for the current time, Huawei stands out from its competitors by offering a more progressive migration towards 5G for its clients. 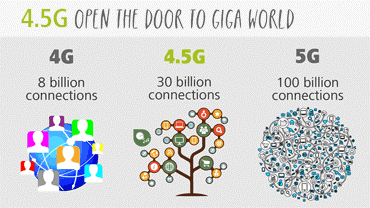 Based on recent history, it should be mentioned that 3G and (afterwards) 4G technologies, were introduced after the deployment of 2.5G and 3.5G! And, for each of these generations, operators had to install new components (hardware and software), inducing substantial charges. What is 4.5G then?

Although it’s pretty difficult to gather precise information without being a customer, it looks like Huawei uses evolving and proven technologies from the 4G advanced standard (LTE-M, LTE-U) to build its way toward the 5G standard. This would mean no disruption with existing technologies, but an inexpensive evolution instead, since no hardware replacement is needed. Only evolving software components would be deployed on the same networks, with compatible testing tools. 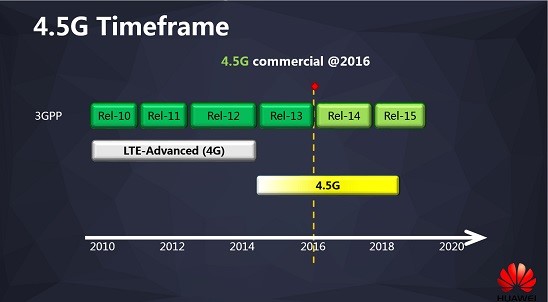 Proceeding this way, Huawei lays the building blocks of a new economic model for OEMs, that of a software editor: No more shipping new specific components to operators for each mobile generation shift. There is no doubt the whole telecom industry will follow the same way, and progressively migrate to cloud services and their generic hardware platforms (Software Defined Network, Cloud-Radio Access Network, Network Function Virtualization), to focus on software and its updates. Testing and validation tools will most certainly follow along the way.

Actors that have anticipated this evolution will have an important competitive advantage, since the expected savings are substantial (between 30% and 50% on CAPEX and OPEX).